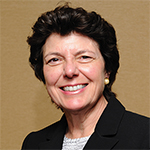 Bankruptcy Judge Mary Grace Diehl was appointed to the bench of the U.S. Bankruptcy Court for the Northern District of Georgia in February 2004. Prior to taking the bench, she was a partner in the litigation section of Troutman Sanders LLP, where she chaired its Bankruptcy Practice Group. An ABI member since 1992, Judge Diehl is a member of ABI’s Board of Directors, a frequent speaker at ABI events and a contributor to the ABI Journal.

She has chaired the bankruptcy sections of both the Atlanta Bar Association and the State Bar of Georgia, and she is a Fellow in and a member of the Board of Directors of the American College of Bankruptcy. Judge Diehl was also president of the Southeastern Bankruptcy Law Institute and chaired the Women in the Profession Committee of the Atlanta Bar Association. Judge Diehl received the “Woman of the Year in Restructuring Award” in 2008 from the International Women in Restructuring Confederation.