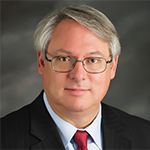 Hon. Scott C. Clarkson is a U.S. Bankruptcy Judge for the Central District of California in Santa Ana and Riverside, appointed on Jan. 20, 2011, and has also sat on the Ninth Circuit Bankruptcy Appellate Panel. Prior to his appointment, Judge Clarkson practiced bankruptcy law and bankruptcy litigation for more than 20 years in Los Angeles, and he served as chair of the Los Angeles County Bar Association’s Commercial Law and Bankruptcy Section from 2008-09. He is a board member of the Orange County Federal Bar Association, and has lectured on ethics and civility for the annual Los Angeles Federal Bar Association Ethics Program. He was a member of the Virginia,  District  of Columbia and California bars. From 1977-82, Judge Clarkson was a legislative assistant to U.S. Congressman Harold L. Volkmer in Washington, D.C., and was assigned to the U.S. House of Representatives Judiciary Committee, where he was a direct observer of and participant in the creation of the 1978 Bankruptcy Code in the House. He later clerked for Hon. William L. Hungate, U.S. District Judge for the Eastern District of Missouri. Judge Clarkson has also been an established documentary photographer in the U.S., Southeast and Central Asia, and South America for more than 20 years. He also traveled to Afghanistan, Pakistan and Kashmir in 2008-09, and Jordan and Israel in 2014, cover- ing recent events in these regions of the world. Judge Clarkson received his undergraduate degree from Indiana University in Bloomington in 1979 and his J.D. from George Mason University School of Law in 1982.