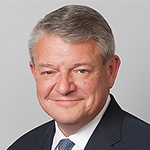 Paul E. Harner is a partner with Sheppard Mullin in New York in its Finance and Bankruptcy practice group. He has played a leading role in significant national corporate restructurings, including chapter 11 cases involving American Airlines, Six Flags Entertainment, Nextel International, National Century Financial Enterprises, Kmart Corp., USG Corp., R.H. Macy & Co., Federated Department Stores, NationsRent, Trans World Airlines, NextWave Communications, Imperial Home Decor Group, Lensar, Inc., OnCure Holdings, Laidlaw Inc., Loewen Group International, Rax Restaurants, and Allegheny Health Education and Research Foundation. He recently served as the court-appointed operating and reorganization chapter 11 trustee of Molycorp Minerals LLC and currently is the court-appointed fee examiner in the chapter 11 cases of Sears Roebuck & Co. Mr. Harner represents debtors, committees, private-equity investors, bank groups, institutional investors, secured lenders and others in bankruptcy cases, out-of-court workouts (including single-asset real estate restructurings) and litigation. He writes and lectures nationally on topics involving corporate insolvency, workouts and bankruptcy. He also advises clients on issues involving distressed mergers, acquisitions and other corporate transactions. Mr. Harner counsels boards of directors and management in fraudulent conveyance, illegal dividend, preferential transfer, fiduciary duty and corporate governance issues, and has represented various enterprises in formations, spinoffs, secured financings and recapitalizations. Turnarounds & Workouts has ranked him among the 12 “Outstanding Bankruptcy Lawyers” in the U.S. numerous times, he has been named a “leader in his field” for more than a decade by Chambers USA, and in 2020 he was named to the Lawdragon 500 list of Leading U.S. Bankruptcy and Restructuring Lawyers. Mr. Harner also has appeared in Who's Who Legal, The Legal 500 US, IFLR1000 and Euromoney's Guide to the World's Leading Insolvency and Restructuring Lawyers, and he has been named in The Best Lawyers in America as "Lawyer of the Year" in the field of bankruptcy litigation. In addition, he is a Fellow of the American College of Bankruptcy and currently serves as a member of its board of directors and as chair of the American College of Bankruptcy Foundation. Mr. Harner received his B.A. magna cum laude in 1985 from Duke University, where he was an Angier B. Duke Memorial Scholar and Phi Beta Kappa, and his J.D. with highest honors in 1988 from Duke University, where he was an Anna Pierce Stafford Scholar and admitted to the Order of the Coif.